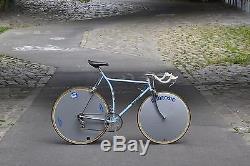 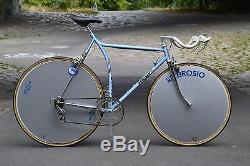 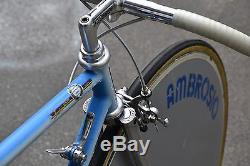 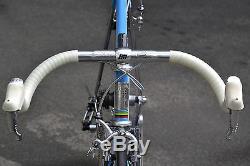 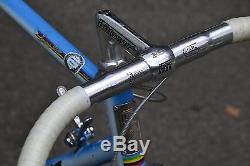 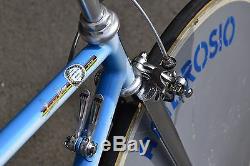 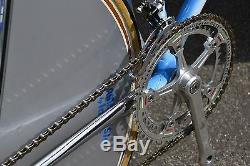 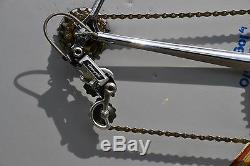 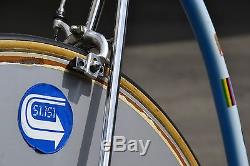 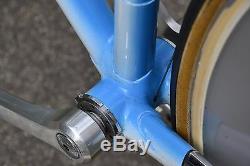 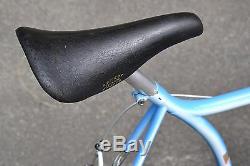 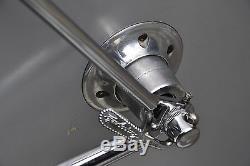 Francesco Moser 51.151 Time Trial Bicycle. Named for Moser's historic achievement in Mexico City, this bike represents the cutting edge of time trial design in the mid-1980s. After first breaking Eddy Merckx's 1972 record on the 19th of January 1984, he went one better and broke it again on the 23rd, cycling 51.151 kilometres in one hour.

Moser was sponsored by Gis and Enervit at the time, and the record attempt used current technology included computer-aided measurements of Moser's velocity on the track. Moser continued to use the bike in the Giro d'Italia and Trofeo Baracchi time trial races. Optically, this bike is extremely similar to the one used by Moser in the 1984 Giro d'Italia, as seen in the photo below. Paint and decals are original. We have carefully restored it to full operating condition, with extra touches such as the original time trial handlebar, Moser pantographed stem, and pantographed chainring.

It comes with a full Campagnolo Super Record groupset, dated to the age of the bike. Wheels are Ambrosio'Record' disc wheel with tubular tyres (622 flat rear, 559 lenticular front) specially developed as a production version of the wheels used by Moser. Includes an appropriate Selle San Marco Concor Junior saddle, a smaller version preferred by pursuit specialists. Please ask for a better rate if you live in Germany or the EU. Please send a message or give us a call at the shop!

The item "Francesco Moser 51.151 Crono TT Time Trial Campagnolo Super Record World Record" is in sale since Wednesday, October 19, 2016. This item is in the category "Sporting Goods\Cycling\Vintage Cycling\Vintage Bicycles". The seller is "cicli-berlinetta" and is located in Berlin. This item can be shipped worldwide.